It hit me, as I am about to enter Week Four of this teacher training program, that I only have seven weeks left. 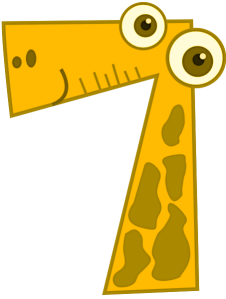 And as I view this news as utterly bonkers, so you are treated to a bonkers visual representation of this number.

I don’t know exactly what’s supposed to happen to the average yoga teacher trainee at this point, but in terms of my program, I have reached a different point of understanding about who I will be as a teacher and what I want to do with the knowledge I gather here.

I’ll tell you one thing: It has nothing to do with inversions. At least, for now.

When I first tried to do headstands, I could never quite get myself up there, until I tried against a wall, kicked up my legs and used that to keep from keeling over, while supporting myself with my shoulders, as you do. When I tried to do it again, slowly, my body refused. My muscles would not work, and a creepy, irritating feeling of panic set in, coupled with pure, egotistical frustration. What did not help was that half the room were able to do headstands, and handstands and forearm stands…and I…could not. I wanted to cry, I felt worthless and had the whole “how the heck am I ever going to teach people” fears dancing through my head. I was not alone in my perceived ineptitute – my friend Erica wore a similarly freaked out look, but she was able to talk me off the proverbial ledge and remind me that this was all ego in play, getting upset and irritated, and one day we both would either master the headstand, or let it go.

If I’d known how much the dreaded headstand was going to plague me for the rest of the week, I would have better heeded her words.

Instead, it took until my teacher, Liz’s class to really feel like I had received permission that it was “ok” not to do this pose, that I was not a failure as a teacher for not being able to do a headstand, and that my worth as a yoga practitioner was not measured on something that evaded me physically and ruined me mentally. I would like to note, I did not seek her “permission,” rather, I just needed to know that I wasn’t “making a huge mistake,” as they say because I was “not good enough” to master each and every pose as graceful as a gazelle and as confident as Helen Mirren or something like that.

Big Realization #1, to say the least.

Big Realization #2 came into being shortly after The Inversions Debacle, when we began alternate nostril breathing and were required to do nothing more than breathe and think about breathing and breathe some more. This is what I wrote, reeling immediately afterwards:

With the breathing, time stood still and I had to sit contained inside my body. The room dissolved but my inner voice still spoke in this dark, womb-like coccoon. I came back into this world and started laughing like a child because I’d forgotten where I was. My insides were as infinite as the night sky and stars that make me cry and ache for what I will never see and experience. Yet all of that is also inside, empty, nothing in the shell of my physical form because really there is nothing, nothing, nothing.

I felt no fear but like I had walked into a room previously locked.

From there, we went onto chanting and Sanskrit and all the things I kind of sort of hated about yoga. I guess I never was open to it because I know that the sutras and teachings are so open to abuse, and I run like a fiend – yes, even now – from anything even remotely like religion. However, the most interesting part did not focus on religion, rather what it was I was trying to better understand about life, the universe and all the bits in between. Yoga is an experiential craft and one that leads to better understanding and unification of the body, the mind and the authentic self. It allows the practitioner to recognize and quiet the ego, to still the mind, and to train the body to move with the breath. It helps, it heals, it allows one to explore the kind of depth, expansiveness and utter emptiness that I felt and allowed myself to experience. The teachings are about 5,000 years old, and like the tradition of Judaism that my mom’s family have passed down, so are my teachers passing down another tradition and understanding. It’s no more religious than I am about Judiasm or philosophy or what have you – it’s like storytelling of the mind and the body and a way to understand life that is transmitted through poses.

Yoga practice is a story and I’m telling it in Ashtanga every morning, I”m sharing it in my teaching and I’m explaining it to those who want to come back to themselves.

The ego is the limited self and through the practice of yoga, we allow this to fall away. My acceptance of not being able to invert was allowing more of the ego to diminish and, more importantly, realize that it is there. Maybe I knew this before, maybe I didn’t, but I had a bigger and better understanding of what it means.

Then we got a bit into the 8 limbs of yoga, and what they meant and a bit of chanting (yama = don’t do, niyama = DO do) and how you pronounce some of these crazy things in Sanskrit (I’m all set with that, thanks.) I do like languages and like learning the names of the poses but…bloody hell.

Big Realization #3: I don’t need to be fluent in sanskrit and it’s totally ok NOT to speak it in every class.

So that was Week Number 3. More things were learned out of the room than in it, but I have to say, I’m pretty thrilled by some of the fine folks in this class and privildged to be on this weird-ass, fascinating, curious and exploratory journey with them.

One thought on “Yoga Teacher Training Week 3: Inverting and Philosophizing”