That first breath of air leaving the NJ Transit car, the first time I can really smell the greenery, and that first look at a canopy of trees are things I ignored or dismissed for years. Coming to my parents house was coming to a place to which I was attached, yet a stranger. I did not grow up here. I had no ties to the area. There were no reunions with friends, other close family or the chance to visit my old haunts that held the mysteries and angst of teenage years.

I did love the house though. The first time I saw it, we visited, in the fall. The day was chilly and crisp, enough to make me want to wear a hooded sweatshirt, ready to pull up over my short hair and bare neck if the situation arose. Pumpkins and brilliant orange leaves dotted the deck – a deck! – and lawn; the latter placed there by nature, not by hopeful sellers. I remember we toured the house, I personally on the hunt for whichever room I could use as my own. I had never been in, never mind lived in such space. This made the self-appointed upper-class homes of a couple of friends look like nothing more than the disgusted looks their parents gave me when I came to visit their darling offspring, or they deigned to set foot in such a rat-infested lair as my parents council house, as they perceived it, coming from a different neighborhood, a different town. Never mind the carpet practically glowed in the dark, or our furniture was second-hand. That was my glow-in-the-dark carpet when I made games of leaping from one hideous yellow shape to another, that was my imperfect yet glorious dining room where I sat and read on winter evenings, back up against the radiators for that little bit of extra warmth. And that was my wine stain on the rug (sorry, mum and dad), that was my room with three different kinds of wallpaper and a desk full of stickers, and those were the art-deco inspired curtains my mum found, made and hung to match the pale green walls and sea-green carpet.

This house was different. No carpets made by a color-blind or stoned designer, no single bathroom, decked out in brown (for some unknown reason). And there were certainly no single room that had to be mine; I had a choice of three spaces I could call my own, naturally selecting the largest with two windows and two closets. But like the air on that fall day, the house felt light and charming and as if it wanted to whisper a happy secret and let out a giggle, right after giving you a warm and friendly hug. It had space and light and life. It had possibilities. And I loved it.

I come back to the house now to visit my parents, escape from the grime-ridden air, grey streets and the odd rat running out from a mountain of garbage bags. Here, my lungs clear of their own accord, and its as if seasons truly exist, as opposed to creeping up slowly, exploding in a flash of how they are typically depicted on film and television, and then diminishing into the quiet which the retailers must fill with noise about the next holiday, two or three months away. In the city, time is rushed and dirtied as much as the few green spaces, the smells in the air, and the cycle of nature itself. If you pay attention, you can see more than the odd squirrel; a raccoon dodging the reservoir’s fence in central park, a brilliant butterfly dancing about as if it had that extra drink the night before, and more often than not, a city rat or mouse, out of its element but feasting on human laziness in any pocket it can.

However, the house and its surroundings have succumbed to fall’s changes; the tinge of leaves still 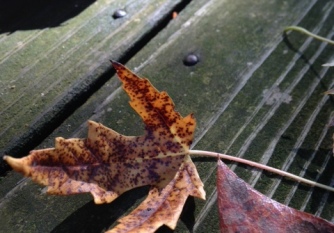 on the trees, the brown of leaves on the ground, already beginning to decay and provide a home for a wayward earwig or dizzy wasp, confused by the bright sunshine and warm air. They cover the hopeful green grass, the aged deck, the drive, the path and the steps. The pile up, making my eyes itch and yet I sweep them away to make a little less work for my parents, and a little clearer path to and from the garage. They keep falling, making my exercise a futile one. A mere gust of wind rains down more of the cracking brown and occasionally scarlet. My carefully arranged piles disperse across the cleared space, and several more earwigs escape the broom and a voyage to the end of the garden – a trip for which they had not booked a ticket. There’s no sadness about this tangible new season. I don’t feel a loss as the light is a little lower in the sky, the shadows longer, earlier in the afternoon. It’s time for a change. Because under the leaves that won’t stop falling until perhaps the first snow, and behind the slightly cracked paint and weathered deck is the house I saw and swept into my heart 15 years ago.