…you are going through hell, keep going,” said one rather esteemed Winston Churchill. Yes, this appears all over the place today; on mugs, inspirational fitness sites, T-shirts and magnets, but for each person to whom this has significance, is has some pretty big-ass, honking significance.

The yoga-induced emotional deluge that hit me this weekend served two purposes:

2. To allow me to finally stop hitting the snooze button and wake up.

So, to bring back in science fiction because that’s apparently my thing: Yoga and Sci-Fi, fans of The Matrix may recall the scene where Neo realizes and believes that he is The One. He is able to see the matrix in a series of binary numbers, and then bend these in order to beat back the dastardly advances of Agent Smith. One-handed, no less.

You may recall this mind-blowing bit of yore where he is, as Morpheus promised, able to stop bullets: 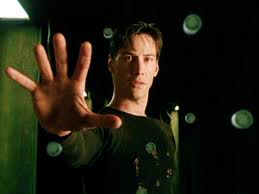 Anyway, essentially Neo “wakes up” and there’s no turning back – no ceasing of understanding the realm in which his mind inhabits and, as Morpheus also explained, the realm in which anything truly is possible. Hey, I just realized Morpheus is totally Neo’s guru, meaning, in the proper sense, Morpheus is the one to show Neo the path. It is entirely up to Neo what he does on that path, but as the rest of the movie goes – and the two terrible sequels – he does some pretty good things on it.

So, this weekend, I woke up in a fashion akin to this.

No one needs to know or should really care about “my” issues, but let’s just say this. I know the body stores emotion. I know yoga helps release that emotion. What I wasn’t prepared for were the continual remembrances and gusts of emotion, over and over. Yesterday, I felt slightly unhinged again, along the lines of some of my worst pre-yoga, depressive and anxious times. Yes, kids, I have depression and I take medicine for it and while I was very angry about this for a long time, it’s the chemicals in my brain not working right and this is a physical ailment in the same way as my broken foot, the difference being a cast won’t put the chemicals back together in the way The Boot helped healing. But I live a well-rounded, experiential life and made a lot of lifestyle changes to sort of put The Boot around my SELF, if that makes sense: acupuncture, yoga, healthy eating, running, moderation in all things, pursuing interests and so on.

Yoga, however, has been better than any therapy ever could be – I don’t like talking to people and while some great therapists did help me with insight I lacked in my 20s, by the time I turned 30 therapy would be me talking to a stranger, then going home for the same conversation with my mom or my friends. I’d rather have the talk with them and save $50.

But neither therapist nor loved one can pull emotion from places that they or I did not know about, and so when I finally became able to do headstand, I started feeling unhinged. This culminated in some crazy tears and pleas to my teacher, “this is normal, right?” She assured me it was. Roll on teacher training for sure. And once these emotions and new understanding came out, there was no putting it all back in again. Which leads me to experiencing the howling gales of feeling that return and return and return.

It’s hell. But like Neo and his truly seeing the matrix, there’s no going back to the complacent, oh-I’ll-finish-that-bottle-of-wine-and-eat-all-the-chocolates sense of before. If I finish the wine, it’s because I’m having a good time with friends and it gets late, not because I need to hide from something. If I eat all the chocolates, it’s because they’re damn good and I’m not paying attention or watching a movie or something. What I’m getting at here, is that there’s no external wound covering any more, and with this understanding comes a wonderful sense of relief; I don’t have to do those self-destructive behaviors, Any More.

This is big people. Massive. Big and hairy and massive and full of emotions.

There is no going back. And the hell is pretty hellish. But like Churchill said, there is no other option than to just keep going. There is another side out there, and on this other side when all the feelings have been felt and all the understandings have been understood…there will be more. But I will be more present than ever and ready for whatever each moment brings. As I am being now. Except the old, stagnant emotions will have been released over the ocean or wherever it is they go (clearly, down my face in the form of tears, so if someone can recommend a good eye cream or wine I should try, stick it in the comments section.)

Deep profound changes have happened. And there is no going back.